To Speak Well of God

It begins with the Divine injunction:

“Have you considered my servant Job?”

The Biblical drama of Job is haunting. A blameless man is tormented by ‘the Satan’ – an enigmatic character never explicitly identified – stripped of wealth, status, possessions, health and children; all with God’s permission! Who is this Satan? More chilling still, who is this God? And why, despite this cataclysmic carnage, does the drama seem to focus on the resulting argument between Job and his three friends?

The ending of the drama seems no clearer. When God reveals Himself, what is He saying? Finally, God restores Job. Yet does this truly repair His permitted destruction of him?

“To Speak Well of God” offers a distinctive identification of the Satan, which unlocks equally unique insights into the classic interactions between God, the Satan, and the Righteous Man; revealing the Messianic message encoded within. Most importantly, it justifies God, even as Job suffers. It lends reason to persevere in faith, as Job did; and speak well of God. It provides an answer not only to why Job suffered but, by extension, how we can see a benign Hand of God even despite, and during, times we also suffer.

John’s Gospel has always been a mystery, departing starkly from the narratives of Matthew, Mark and Luke. What is John’s angle?

This interpretation reveals John has deliberately arranged his gospel as a reflection of the creation sequence from the Old Testament Genesis; the very opening chapter of the Bible. John portrays Jesus’ character and journey in six discrete sections, each of which is a spiritual blossoming of the original physical element of the Genesis account: 1. Light, 2. Living Water above, 3. Bread for Food, 4. Lights to Rule, 5. Deadly Water below, and 6. Kingship.

Most relevantly for us today, “John’s Creation” shows why it is valuable to see Jesus in this way, because it outlines his pioneering path of our own discipleship, through: 1. Illumination, 2. Baptism, 3. Nourishment, 4. Subjection, 5. Humility and 6. Kingship

The King Who Fell

“Let him kiss me with the kisses of his mouth” opens the lyrics of the Bible’s most complex Old Testament mystery: Solomon’s enigmatic Song of Songs.

In truth, the Song is exactly as it appears: an intensely passionate expression of romantic love, both ascetic and sexual, between two lovers; with the poetry structured as a chiasmus, i.e. in two anti-symmetric halves.

The Song’s lovers are forever imprinted as timeless emblems for this flawless – except godless – love; and the Divine Hand enriches the Song symbolically, creating an allegorical overlay with spiritual instruction. The literal story-line and interwoven allegorical messages imprinted in the symbology coexist effortlessly: rooting the Song on Earth does not limit it reaching to Heaven.

The spiritual lessons imprinted in the Song are simple, profound and highly relevant to the 21st century disciple. Sexuality is not evil, but it must not become your God, as it did for Solomon; whose innocent, yet ultimately deadly, Bride, was drawn to him from Lebanon and then, as the power dynamic between them transferred utterly, led him away from Jerusalem to play on the mountains of pleasures.

The Picture Bible is exactly what it says. There are 1,189 chapters in the Bible (albeit almost all of those divisions are arbitrary) and the Picture Bible shows one image, or composite image, for each chapter.

The record of human history has been incomparably bloody and brutal, and even the text version of the Bible can shock. Translating that text to pictures, therefore, has the propensity to create an unacceptably gruesome or offensive display. Thus a balance has been attempted to be struck to avoid presenting images which will offend, while at the same time remaining as faithful as possible to the raw text.

From artistic preference, these images tend not to be the old, dark paintings of Rembrandt, Raphael, Michelangelo and the like; but modern high definition photography representative of the biblical plot either literally or by metaphor. By 2010, Google was claiming to have approximately 8 billion images indexed, meaning that for any thought, scene, mood or message there were copious images online from which to choose. This Bible representation was subsequently assembled in 11 months during 2011.

Once Upon a Tom

As a marked departure from the theological and philosophical considerations above, this is a collection of anecdotes to describe a dear friend and work colleague (1998-2015) of mine. He is the archetypal mad inventor uncle, the type who owns a garden shed from which suspicious fumes emanate and occasional eye-brow-removing explosions blast; perhaps followed by the faintest “oops”. He stands out as worthy of biographical record because the Mad Inventor is, somewhat Last-Samurai-style, a magnificent yet vanishing species, slowly and disastrously suffocated by our cultural over-abundance of caution in the domestic setting, and OSHA-induced strangulation at work.

Read with caution: the stories, chillingly, are all true. 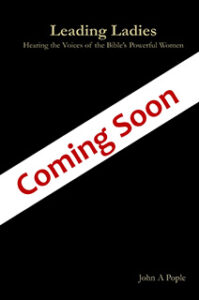 Leading Ladies
Hearing the Voices of the Bible’s Powerful Women

“We need to elevate female voices and stories… For too long we’ve been seeing the world primarily through men’s eyes.”
So spoke a female National Geographic Explorer in a unique 2019 edition dedicated to 100 years of American women’s suffrage; in which all contributors were female. The notion provoked me to an in-depth exploration of the fascinating lives of the Bible’s primary female characters. Whether morally good or evil, we examine the powerful influence these women had, necessarily “Leading Ladies” all, even from their positions of social disadvantage. Most importantly, we see that several of them (Deborah, Jael, Ruth, Esther) are blessed to fulfill, in foreshadowing cameo, one of the various roles of Messiah! Glittering jewels of interest can be discovered from them, including seeing how Mary Magdalene rises in precedence above the male apostles; solving the surprising destinies of Jephthah’s daughter, and Delilah; and illuminating new takes on some of their characters, including Rachel, the Bride of Solomon’s Song, and the Witch at Endor.